An incident happened and you rush to the recorder to check the footage, all of a sudden you see the message “no recording found”. The whole purpose of your security system is defeated, there’s no footage stored in the unit.

In this guide, we will talk about the “no recording found” issue that may show up on Dahua NVRs or DVRs. The issue is usually caused by improper recording settings, bad firmware, or damaged hardware. There are a few things that you can do to get the problem fixed right away and we’ve listed a couple of suggestions below.

If no footage is stored, then why do you have a security camera system in the first place? Surely, it’s a deterrent factor, but still, if a crime happened you should have the footage safely stored.

General recordings are not saving

By default, Dahua recorders are set to record on continuous mode (24/7), so there’s no need to do any settings, it will record by itself. If for some reason, the machine is not recording at all then you should check the status of the hard drives.

Go to HDD Manager and make sure the “Status” of the drive reads Normal as shown below. If it says something else, select it and then click Format (you need to format the HDD the first time you install it).

Additionally, if it says “HDD not detected”, check the cabling inside the unit, ensure that the data and power cable are correctly plugged in. It may happen that the hard drive is burned or damaged, if so, replace it with a surveillance rated hard drive.

Motion Detection Events are not being recorded

Motion Detection allows the user to go into playback and see what time the motion took place. If not set up correctly, the motion may not trigger and you may have no footage of your security camera system.

First of all, we need to check the Schedule settings. Below is an example of a unit configured to record continuous and motion detection mode at the same time. The green bar stands for continuous recording, the yellow one is for MD (motion detection). 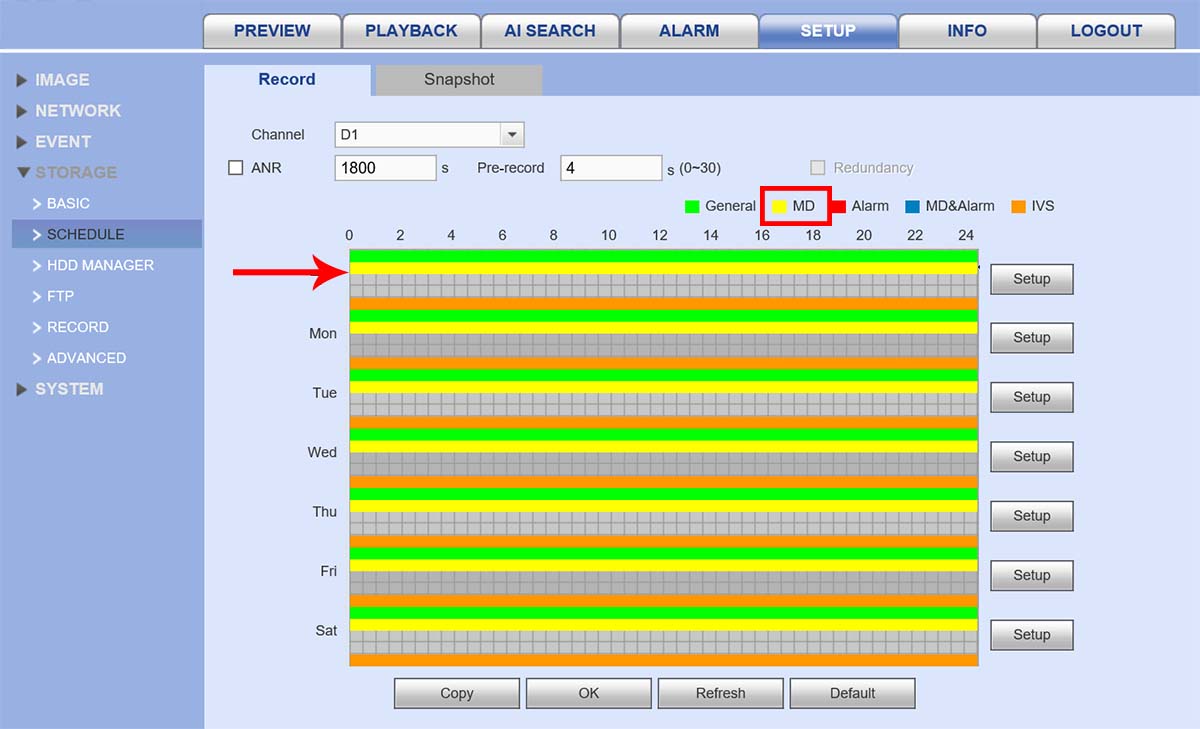 Click the setup button and make sure the settings are done correctly. You can have both selected, or just MD. Selecting the All button (highlighted in the picture) applies the period settings to all days of the week and helps make the process simpler.

The record settings in the picture below are set to record the Main Stream when an event occurs. MainStream delivers the highest resolution and picture quality that your CCTV system can provide. 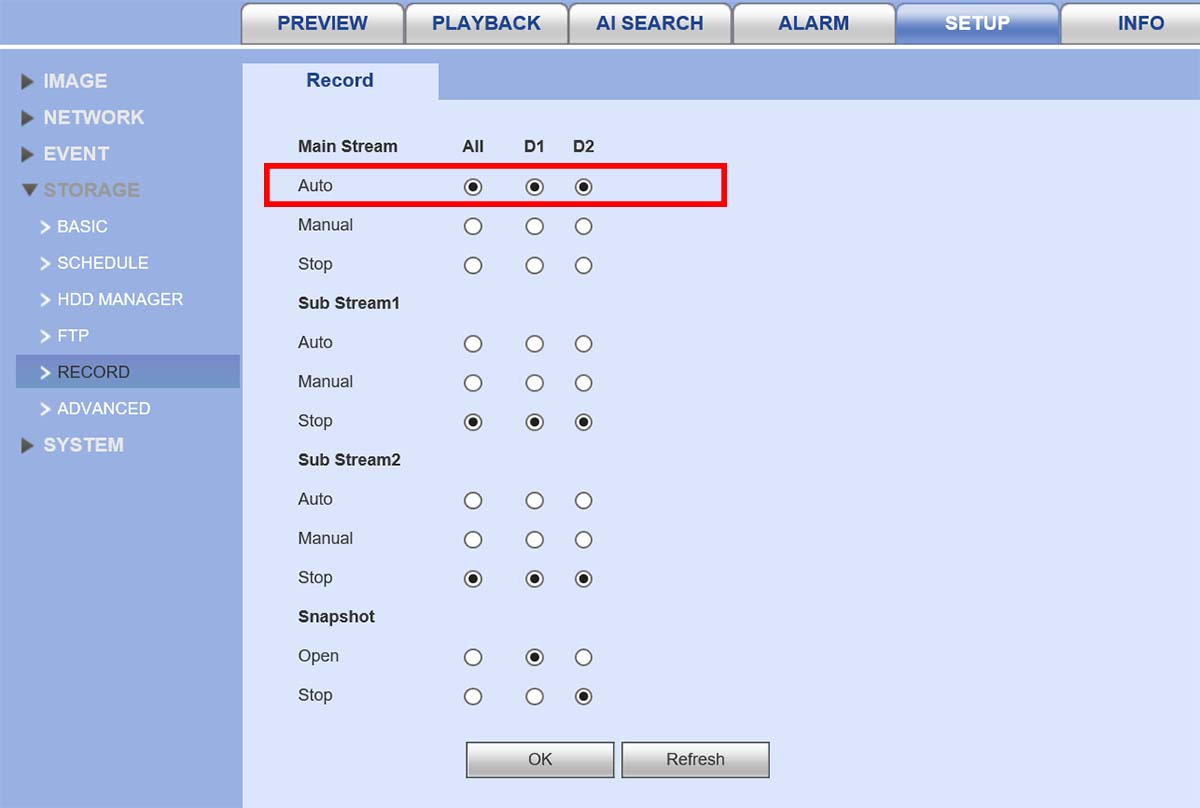 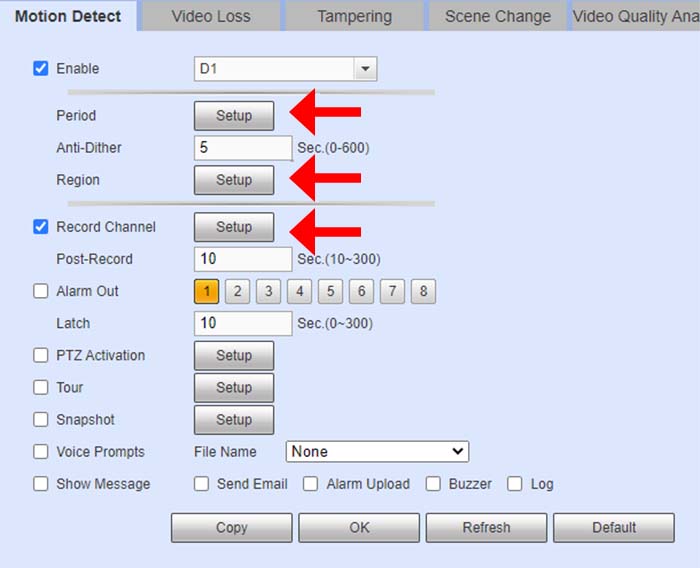 The period setup menu is just like the schedule setting above and the color denotes the time period that an event will trigger a recording.

The picture below is configured to record any event that occurs 24/7, it doesn’t mean it will record 24/7, but the motion detection is enabled for the whole 24-hour period and will store the footage if it gets triggered. 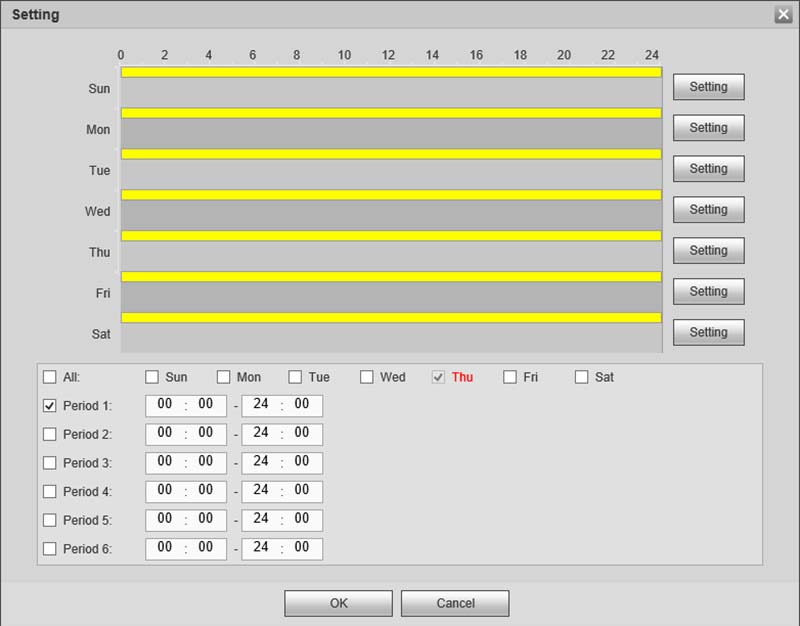 The region setup menu is where you would mark specific areas of the footage to be tracked. For example, the colored squares are going to be motion tracked, the image below has the entire view of the camera tracked.

If there’s a tree and you don’t like to trigger the motion, simply exclude it. Additionally, you can create various regions on the image with different motion sensitivities and thresholds. 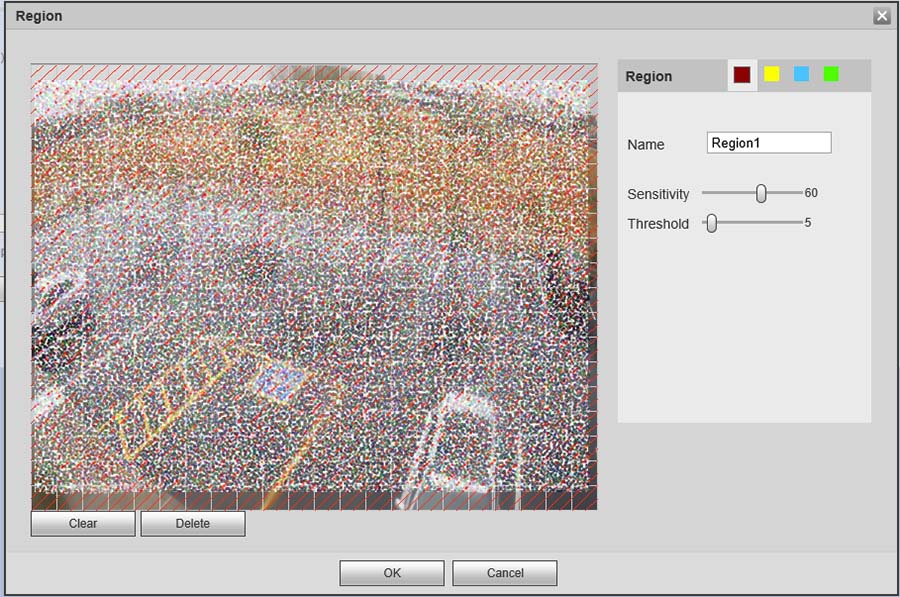 The record channel setup menu shows a list of channels and in order to function correctly, the current channel must match the record channel in the same way shown below. If it doesn’t match, it may cause all the cameras to record on the camera channel. 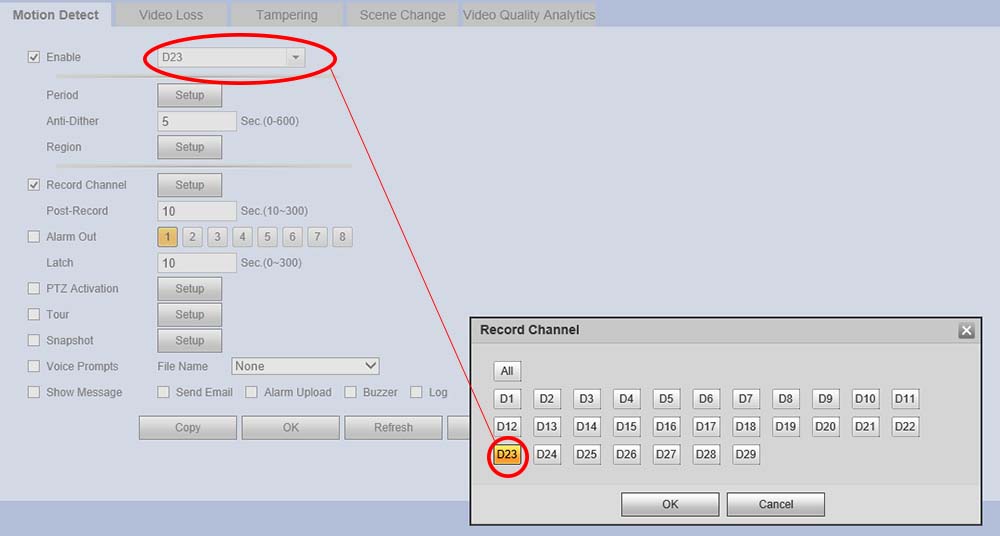 Why is only one camera recording motion?

If you are only getting motion detection on one of your cameras, you will need to make sure the recorder channel, under event and video detect, is specified for the channel that it is currently on.

Why is the recorder not recording on motion when it is set to?

This can happen for a bunch of different reasons: if the enable box was not checked under video detect; if the motion was not set to record under schedule; if the period was not set correctly under video detect or the region settings are not sensitive enough. If the recording channels are not matched, it may store the recordings on the same channel.

Why do I have so many events?

If motion detection is setting off too much, try adjusting the motion region under video detect. You can adjust where the motion would take place with the red boxes, as well as the sensitivity and threshold. Additionally, you can exclude objects that unnecessarily trigger the camera such as a tree, a busy street that you’re not interested in, lights, etc.

What does “Sensitivity” and “Threshold” do and how does it affect motion detection recording?

Sensitivity will affect how large of an impact an object or person will need to make in the scene to push past the threshold required for an event to be registered as a recorded event.

The threshold may be adjusted in cases where there may be a lot of movement in the scene, such as branches of trees moving or insects moving past the camera. Adjusting these two values on a per camera basis will help alleviate false positives for motion detection recording.

Why is there a solid yellow bar when the DVR/NVR is recording on motion detection?

If there is a solid yellow bar, it is constantly picking up motion. A way to adjust that would be going into the video detect tab and adjusting the region/threshold as it could be picking up tree movement or something that is not relevant to the recording.