There are a few terms used in security camera systems denoting the performance under challenging lighting conditions. In this article, we will explain these confusing terms to get a better understanding of the camera’s specs.

The most common feature in CCTV cameras is the so-called WDR. WDR takes a low light optimized and a high light optimized image and then stitches the two shots into one image to prevent shadows from being too dark.
When describing the WDR, the industry standard is to label the feature as digital or True/Optical.

The industry-standard way of describing WDR is to state whether it is digital or True/Optical. True (sometimes called Optical) WDR is better because the optical WDR also includes digital WDR. In other words, you get both hardware and software improvements.

The quality of WDR depends on the manufacturing specs and it is measured by a dB rating. The higher the dB rating, the better the image quality of the camera. True WDR uses hardware to improve the image that is captured and then uses software to clean up and enhance the image (post-processing).

True WDR uses image sensors and a digital signal processor (DSP) to provide even illumination to all areas of an image. A True WDR-enabled video surveillance camera has two sensors that take two scans of each video frame. The first, at low speed (to capture more light), shows the image in normal light conditions. The second scan is taken at high speed to capture less light overall and get an image with strong light in the background. The camera combines the two scans to form a single, balanced, well-illuminated image.

DWDR (Digital WDR) uses algorithms instead of sensors to digitally brighten too-dark areas and dim too-bright areas. DWDR relies on the DSP chip instead of the image sensor to provide WDR. It adjusts each individual pixel of the image and calculates exposure accordingly. This technique has some limitations; the intense manipulation of pixels leads to the overall image being more grainy. On the other hand, DWDR doesn’t need costly image sensors, so DWDR can be a more economical option when WDR is a necessity. 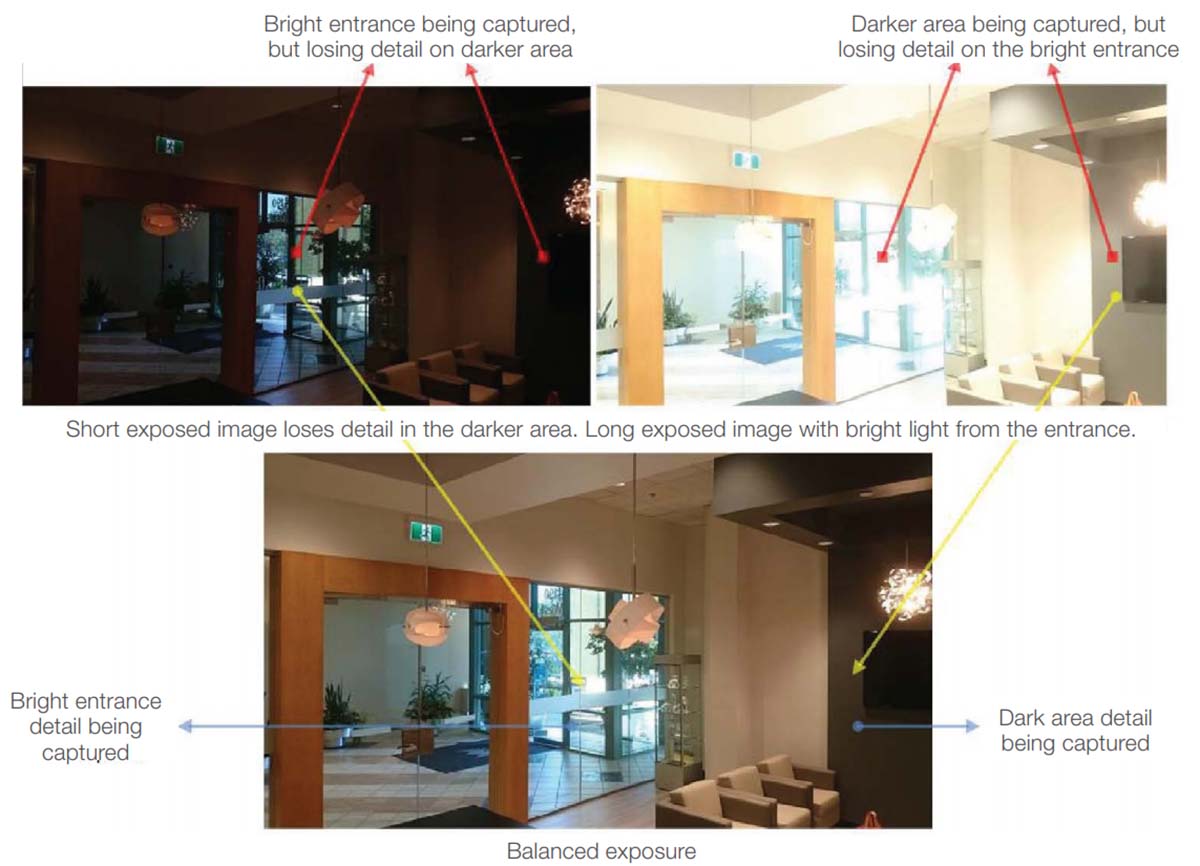 What is High Dynamic Range (HDR)?

To conclude: HDR/DWDR is an algorithm that helps clean up and improve the image quality. It’s not the same as True WDR, and actually, it’s quite inferior.

Are all True DWR cameras the same?

Let’s start by understanding what dB units are. The dB unit is the ratio of the brightest and the dimmest object that can be captured by the camera. This indicates the range where the WDR works. The higher the ratio, the greater the difference between the low light and high light spectrum that the security camera can capture, and the better your picture will be in low light. In other words, the higher the dB value, the better the camera performs in low light conditions.

To remember: dB is a way to describe how well the camera can cope with difficult scenes containing both very bright and very dark objects. The dB unit is a measure of a ratio, namely the ratio of the radiance of the brightest and the dimmest object that can be captured by the camera.

Originally, HDR meant that the camera used a software algorithm to clean up or improve the picture quality. These results were created by the software, and not by hardware parts. Later on, True was added (True HDR) to indicate an Optical WDR (note: not this is not “True HDR). So, “true” indicates the image is enhanced by the hardware and software sides.

In many cases when companies advertise the cameras as “True HDR”, they will not list and dB rating, or tell you if it’s optical or digital. Basically, they play with these terms to confuse the customers and to make the product sound better. To compare to WDR products you need to check the specs for each product. If the specs are not there, most likely the manufacturer or the reseller are lying.

Where to Use WDR Cameras

Complicated light situations are a concern for many surveillance installations. If the background is too bright, the subject in front of the camera will appear dark rendering the captured video useless. Cameras equipped with WDR improve the image quality of any high-contrast lighting scene (the monitored area with portions of bright light and portions of dim light). WDR function enables cameras to capture image detail from both poorly and richly illuminated areas.

The most commonplace for WDR camera is monitoring entrance doors or against windows where there is an intense backlight. Regardless if it is a store, bank, restaurant, or hospital—every facility must have entrance doors that can introduce bright light compared to the interior space. WDR cameras can compensate for the overly bright or overly dim area and provide a snapshot or video with clarity.

The sun constantly changes position throughout the day. Outdoor surveillance cameras are frequently required to face strong sunlight in contrast to the shadow of the building or a covered porch at some points during each day. A WDR camera can compensate for this illuminance difference.

An opposite example of a bright backlight would be a dim background and a vehicle with bright headlights driving toward the camera. WDR cameras can do a better job of capturing a license plate image in this high-contrast scenario than a non-WDR surveillance camera.

Every surveillance camera relies on ideal lighting conditions to produce a high-quality image, so you can see events on your property both recorded and in real-time. With too much light, the image is blown out; too little light causes the image to be dark and unusable. To balance in lighting for clear video images, Wide Dynamic
Range (WDR) technology is a key criteria when selecting a security camera.

Many typical surveillance situations introduce a great variation of lighting conditions where a camera with WDR improves the overall picture readability. Selecting a camera model that features WDR (or DWDR) is one of the specifications that is worth paying close attention to if complicated light conditions are expected within the installation.