How to use video balun for CCTV

CCTV video baluns are used in CCTV systems as a way to make the so-called BNC cameras compatible for use with Cat5e/Cat6 cable. The CCTV baluns are also known as UTP baluns and CAT5 baluns, and they allow CAT-5 cable and other twisted-pair wire to be used in CCTV camera and HD security camera installations.

By using video baluns, UTP wire such as cat-5 can be run over long distances easier than coax cable and for less money. Active balun transceivers enable UTP wires for cameras to be run distances up to 5,000 feet (1500 meters).

Why use a CCTV video balun?

There are scenarios when you will need to use an Ethernet cable instead of a coax cable. This normally relates to distances as a video signal can reach further distances over Cat5e than with regular coax cables.

It’s also down to personal preference; some people prefer using baluns as it’s quicker and less fiddly than terminating your own coax cables. You can also run power and video down the same Cat5e cable if using baluns but we wouldn’t recommend it on longer runs as the power could interfere with the video signal.

A lot of people would point to using Cat5e cables and baluns as you will also be future-proofing if you were to upgrade to an IP CCTV system. All that you would need to do is crimp an RJ45 on the ends of the cables and plug these into the cameras.

There are a few devices that could convert an IP signal to use a coax cable but these do cost a lot more than a balun so if you were in a position to use Cat5e cables then it might be worth considering.

However, if you have an analog (HD or not) CCTV system, then using the Ethernet cable and video baluns will future proof the installation. That’s our recommendation.

How to use a CCTV video balun 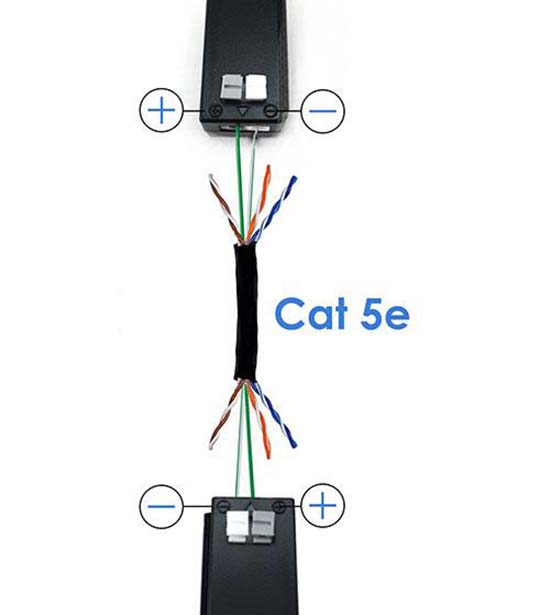 Some video baluns have push pin terminal connectors so after you have stripped the cable push the button down and insert the bare wire.

Once released the pin will grip the cable and secure the connection. On the BNC side of the balun simply insert and twist the end from the camera or DVR. Once everything is connected then the video signal will be carried through from the camera to the DVR as if it was using just the one continuous coax cable. 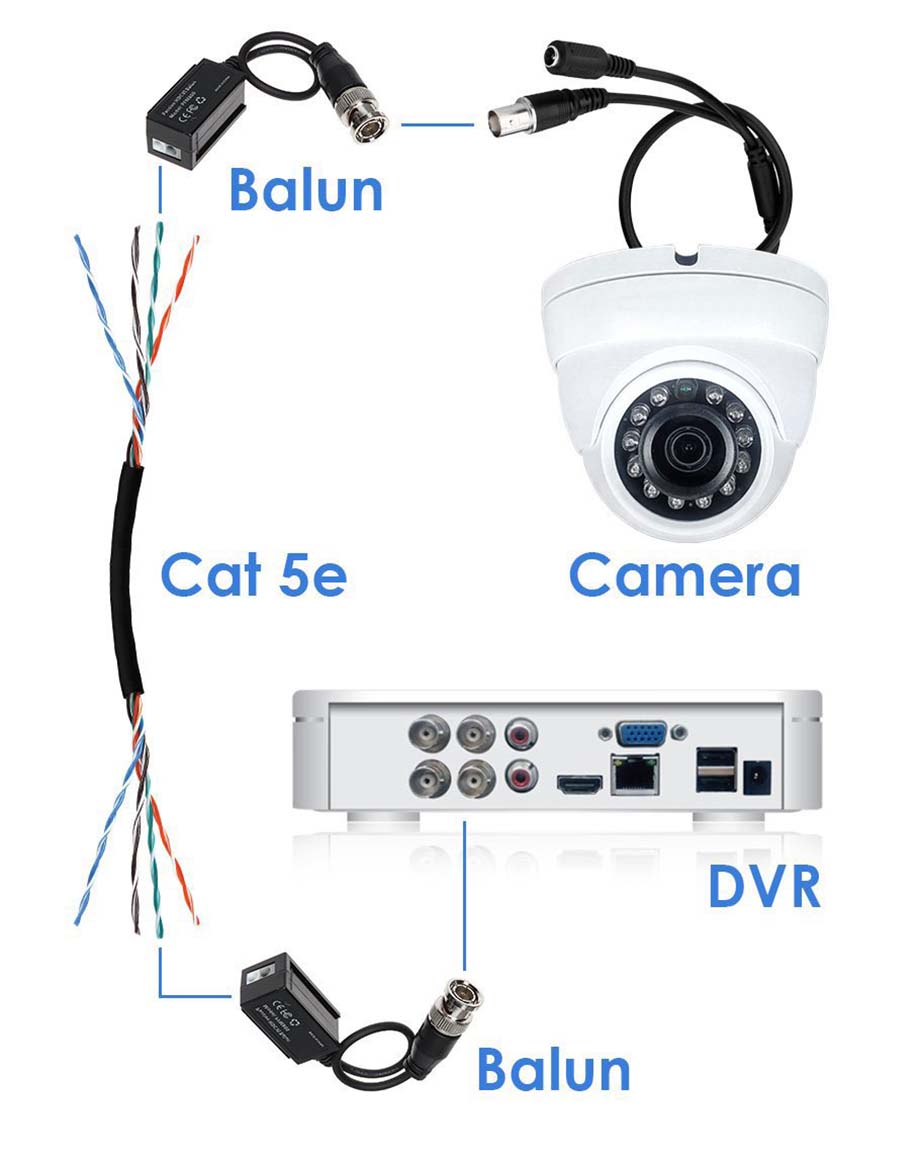 A regular video balun will send video from a security camera that has a BNC connector back to the DVR, but will not provide power to the camera.

You still need to run an additional 2-lead power cable or use an individual power adaptor at the site of the camera. The maximum length of video transmission varies depending on the signal type of the BNC camera. For older analog cameras it is 1000 feet, and for HD security cameras over coax, it is 800ft. 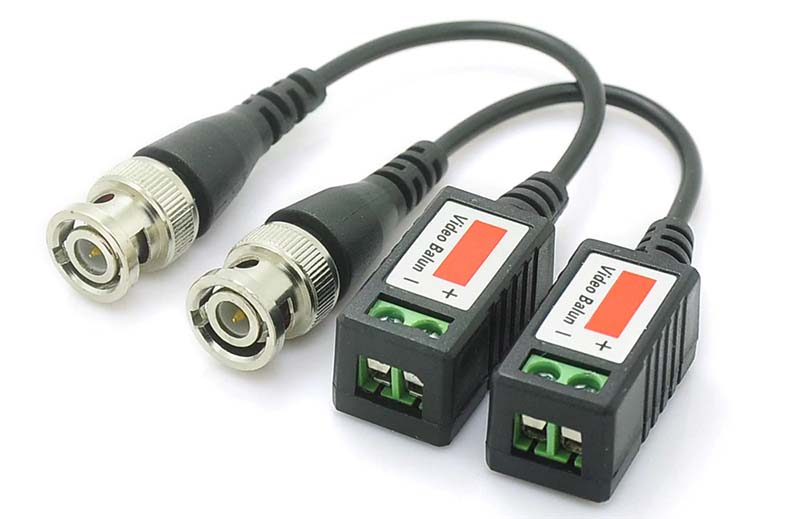 Another and much more popular option is a video power balun. As the name implies, it will send video back to your DVR while providing power to the camera through the same length of Cat5e.

These baluns will require you to crimp an RJ45 connector to both ends of your cable run. Like the video balun, the maximum length of transmission through Cat5e cable depends on the resolution and signal type of the BNC camera. 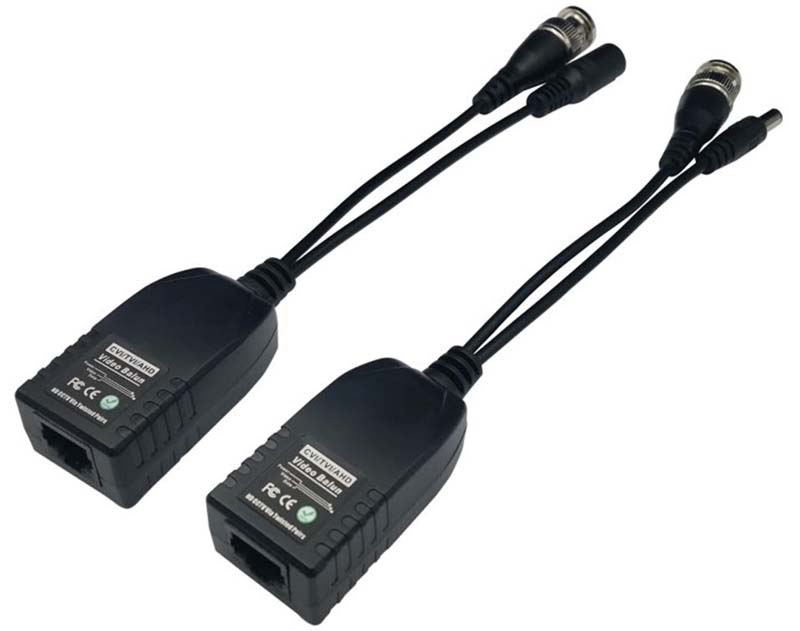 The Video Power and Data Balun are specifically for use with Pan Tilt Zoom (PTZ) cameras that require an RS485 data connection with the DVR. Like the video/power baluns, they’ll require that you crimp RJ45 connectors to both ends of your Cat5e cable.

Without this, you wouldn’t have any control over an analog PTZ camera, negating its purpose. Just like our two CCTV balun types, the maximum distance varies on camera signal type and resolution.

However, as a rule of thumb, since PTZ cameras consume a lot of power we do not recommend powering them over CAT5e or CAT6 cable over 100ft.

This is where things get a little more interesting. A passive balun transceiver works similarly to the previous three options, but with units like these, you’ll be able to consolidate the number of video baluns needed.

Using a single passive transceiver and a video balun for each camera, you can have a streamlined installation without multiple small baluns hanging on the back of the DVR.

You can have runs up to 800 feet for HDCVI cameras at 1080P resolution. Keep in mind that, like the video balun, you’ll need to find another way to get power to your camera.