How to watch public surveillance cameras

We bet that even from your city or small town there should be plenty of public surveillance cameras online on the internet. Obviously, people are curious to access these cameras, possibly to feel like a wanna-be spy sneaking on a random person’s camera.

There are thousands of live surveillance cameras with interesting views from coast to coast that you can watch online anytime. Below we’ve listed the resources.

Live surveillance street cameras belong to the local or federal government and most of the time their video is not available for the public eyes. However, some of them are offered online for the taxpayers and you watch them.

Obviously, the most common types of live street cameras are the traffic surveillance cameras that are installed and designed to capture vehicle activity, illegal parking, illegal turns, reckless drivers, going on the red, and random criminals.

There are thousands of cameras live streaming from beaches. Just search on google your city name followed by “live camera” or “live beach camera”.

For example, search “Santa Monica live beach camera” and google will list a lot of websites offering live cameras from Santa Monica. You can check them one by one until you find the one that interests you. Sometimes the live feed may be password protected, meaning you’re not allowed to access them. 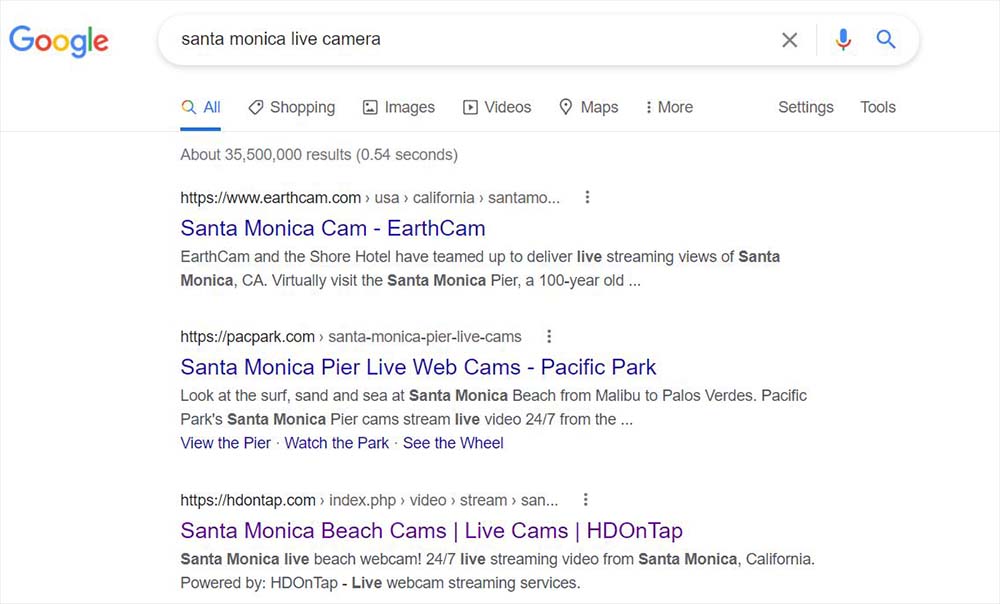 We found a lot of live view surveillance cameras from Santa Monica’s famous beaches, such as the one shown below. Pretty cool, right? Using the same logic you can search other seaside places such as Miami, New York, etc.

Unfortunately, a lot of home security cameras end up on the internet, and it turns out there are a lot of people who search on google for these types of live streams videos and they get plenty of results.

These unsecured live surveillance cameras are installed on private areas (such as apartments, homes, houses, etc) and other sites list them for public viewing. In itself this is illegal, sometimes people add these cameras online themselves (that’s pretty rare though).

For example, Insecam.org is a website that scans the internet for unsecured cameras and, if something is found, they’ll add the live cameras for public viewing on the internet. A screenshot is shown below.

Note: There’s a risk when using security cameras in private areas and having them connected to the internet. Most of the time these live home security cameras use default passwords or easy credentials, or sometimes they’re cheap unreliable cameras that get hacked easily.

That’s why it’s important to get a professional installer to do the cameras in your house, or if you want to do the job yourself, purchase reliable security cameras from well-established manufacturers.

You can watch public surveillance cameras using numerous websites that offer such a service for free. Check out the following list.

EarthCam: This is the largest website that allows you to watch live cameras from different cities and locations all over the world. You can select certain cities, or even watch braces, tourists hotspot, construction sites, wildlife monitoring stations, bird nests, zoos, stadiums, museums, bridges.

Insecam: It provides thousands of lice security surveillance cameras all over the world. Not just from public places, but private homes as well, small businesses, venues, restaurants, bars, whatever they’ve listed there. You can select the country and start to explore.

Live Beach: A great website that lists beach live cameras around the United States, just select the location and you’re ready to go. The website is easy to navigate and nicely organized.

In this article, we showed how to access public surveillance cameras and watch live videos from cameras installed all over the world. These cameras can be public ones such as traffic live cameras, beach cameras, or even the ones unfortunately installed on private homes.

It should be noted that if you see live home security cameras that are illegally published for public viewing, have them reported to the local authorities. The cameras from government websites are okay, but the ones that are from private houses are most likely illegally added.