This error shows up when you hook up a camera to a Dahua XVR recorder. You may see on the screen “Invalid Camera Video Standard” or “Invalid Camera Format” (as shown in the picture below).

These types of recorders are sometimes called penta-brid, “penta” means five and notes the number of camera types supported by the recorder.

The invalid camera format error is related to a compatibility issue between the camera and the recorder; it can be fixed by changing the camera type on the settings or updating the firmware. In some cases, the issue cannot be solved because the camera resolution is not supported by the recorder.

In this guide, we will show how to easily fix the invalid camera format issue, follow the steps one by one and you’ll get it fixed in less than 10 minutes. The instructions are valid for the Dahua logo and OEM versions (sold under other brand names).

Let’s say that you bought a camera online and you’re trying to connect it to your DVR. You did so and then there’s no picture on the screen. Just a message that says “Invalid Camera Format”.

The error means that the camera and the recorder are not compatible, they can communicate but they can’t properly “understand” each other.

Sometimes the issue is caused by the camera’s video format not matching that of the DVR. For example, the camera is AHD while the recorder is set to detect the HD-CVI cameras.

To fix this problem, you need to Main Menu > Camera > Settings and you’ll see the menu as shown below. 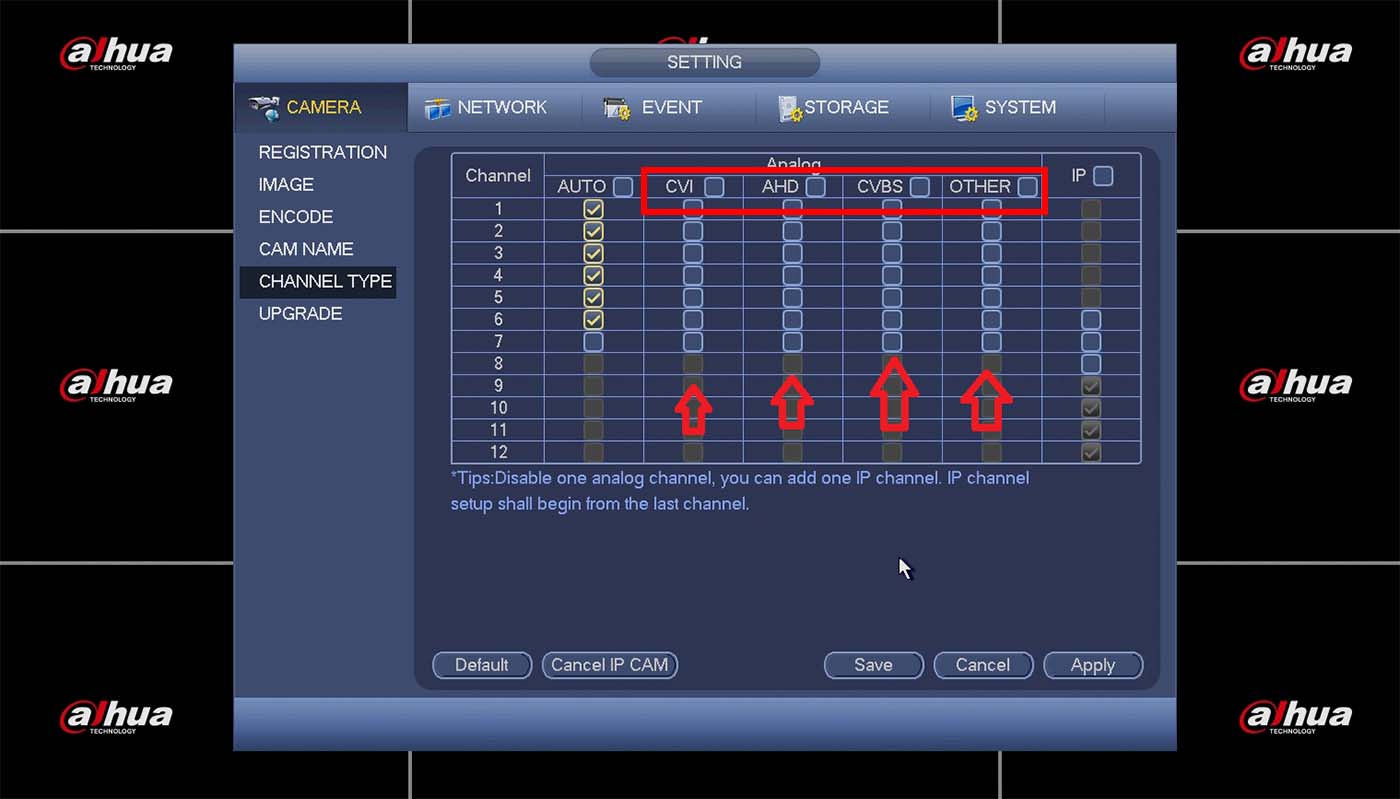 Here you have to match the channel with the type of camera that you’re trying to connect. You need to find out what camera you have, inspect the box, or check the spec sheet.

If the camera is AHD, you need to tick the box of AHD on the channel number where you’ve plugged the camera. Once you save the settings, the DVR will reboot and when it comes back you should see the live view image.

If you’re using the new GUI of Dahua, the interface will look like the below. Either way, the logic is the same, you need to match the camera format with the DVR’s settings. If you still don’t see the image, continue to the next section. 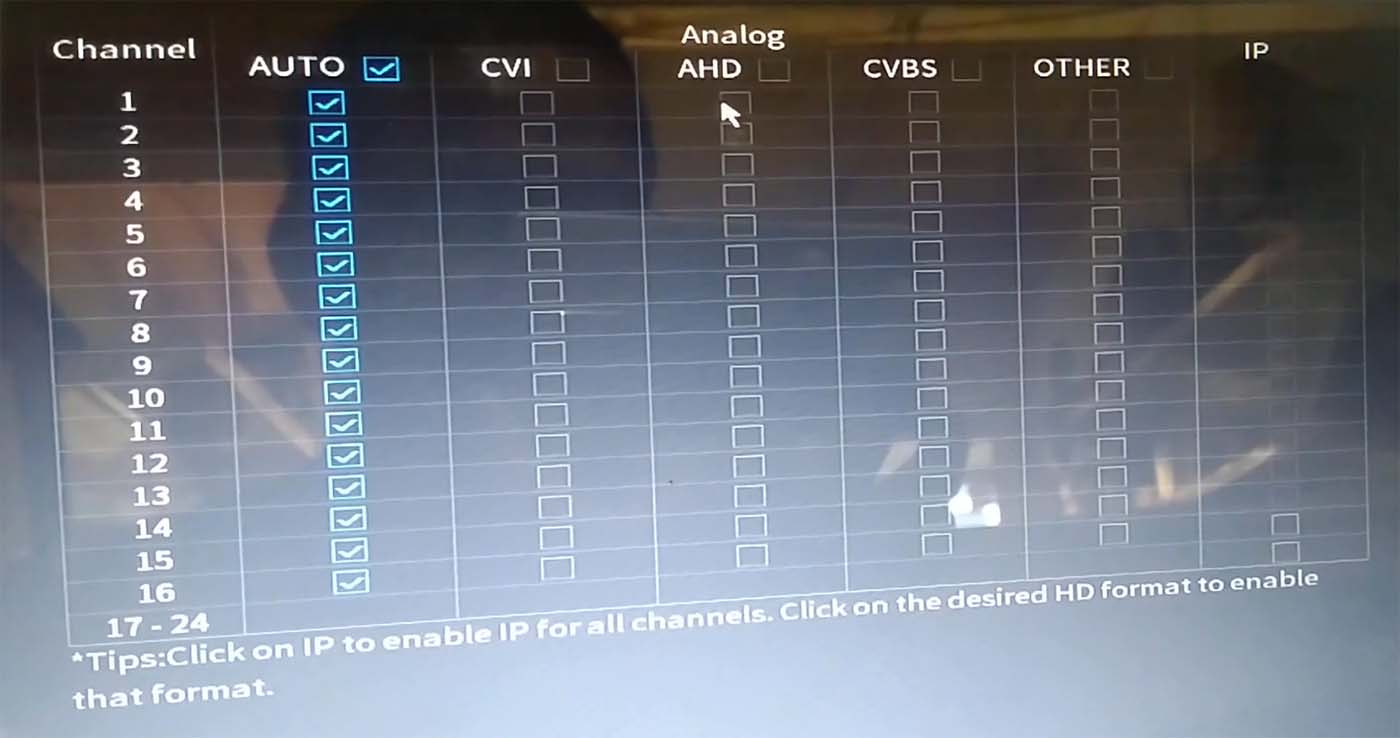 Note: On Dahua recorders, the OTHER options indicate that the cameras are set for HD-TVI cameras. Additionally, if you select AUTO, the recorder will choose the video format automatically, it doesn’t work always but it’s worth trying.

This one is very important. Sometimes even if the settings are correct, the channel still shows “Invalid Camera Video Standard”, why is that?

That’s because the camera’s resolution is too high for the recorder, especially if you’re using 5MP cameras or higher.

To fix it, you need to update the recorder’s firmware. Start by downloading the right firmware for your recorder. You can get it from Dahua or from the seller/dealer. Either way, make sure it’s the correct one. Save the file on your computer.

Then place the upgrade file on a USB flash drive which has to be inserted in one of the USB ports of the DVR. Go to Main Menu > System > Upgrade, select the file from the USB and then wait until the update is done. The DVR will automatically reboot and come back after a few minutes. 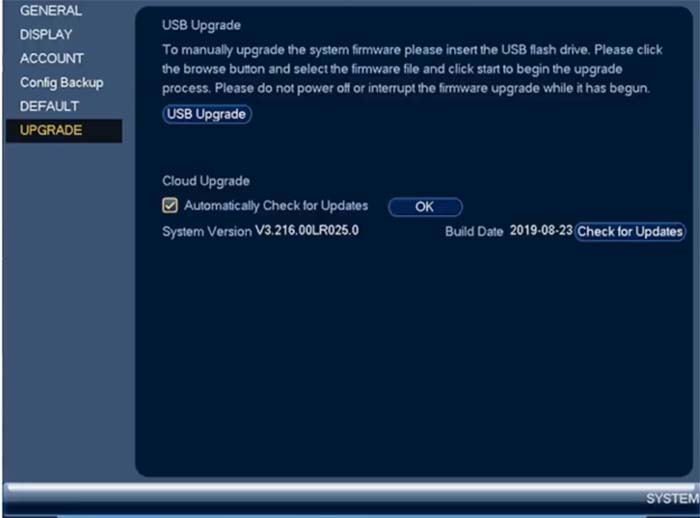 Reconnect the camera and see if you get any pictures. Make sure the Channel Type is selected correctly as shown in the first section of this guide.

DVR does not support the camera’s resolution

Most of the time the two steps explained above will fix the invalid camera format issue. But sometimes they don’t. It’s possible that you’re using an old DVR that doesn’t support the resolution of your new camera.

For example, your DVR or XVR supports a 2MP camera and the camera you’re connecting to it is 5MP. It won’t work, the recorder will be recognized as an invalid video format. You either have to get a camera that works the DVR or change the DVR with a newer one.

In some other cases, the camera’s resolution is supported by the recorder but the signal is not compatible. Let’s say the DVR supports only HD-CVI and analog cameras while you purchased a TVI camera.

Note: some of these cameras are called 4-in-1 cameras, which means they have a switch on the pigtail where you can select the video type (TVI, AHD, CVI, analog). Check it out and match the signal with one supported by the DVR.

To fix the invalid camera format issue (sometimes it says “Invalid Camera Video Standard”) you need to select the correct video format on the DVR side or update the firmware to the latest version (this one fixes the issue 90% of the time).

If you still can’t see the live image, it’s possible that the DVR doesn’t support the resolution of the camera, most likely you bought the wrong camera. You may ask the seller for technical support or even Dahua if you bought the item from one of their official partners.

If you have any other suggestions, let us know via the comment box below.

Dahua: Hide cameras on an NVR when logged out

How to enable Audio Recording on Dahua camera or DVR (NVR)

How to Modify Password Security Questions on a Dahua Recorder