Is It Legal to Have Security Cameras in Bathrooms?

Have you ever thought about hidden security cameras in bathrooms? Finding a hidden video camera in a bathroom or other private spaces can be traumatizing.

It’s a huge invasion of privacy in a space that is supposed to be absolutely private such as a bathroom, fitting rooms, showers, gym lockers, etc.

In this article we will share useful information about the law regarding cameras in bathrooms, are they allowed to be installed in restrooms, and other practical tips on how to find hidden security cameras.

Is it legal to have security cameras in bathrooms?

The locations that are not allowed to install security camera are listed below:

Violators may get punished with severe penalties including jail time, they even can make it to the sex offender list.

However, there’s always an exception in every rule, and in many states, there’s no law that specifically prohibits cameras in private places, although there are laws that protect your privacy in places where privacy is expected.

When Is It Legal to Put Security Cameras in Bathrooms?

There are some exceptions when putting security cameras in bathrooms or other private places that could be considered legal.

Security Cameras in Public Bathrooms are Pointed at Common Areas

This is usually applicable in educational institutions such as schools or colleges. To increase student’s security, to reduce smoking, drugs, vandalism, and violence in private places, some schools are allowed to install security cameras in public bathrooms or other spots that are supposed to be private.

These cameras must be fixed, meaning they cannot be zoomed in or out, rotated, tilted, or angled. Additionally, the cameras must point to common areas in public bathrooms, areas such as the wash stations, drying machines, etc. It’s not allowed to point cameras to the stalls, mirrors, or showers.

Security Cameras are Allowed in Your Own Bathroom

It’s allowed to install security cameras in your own bathroom. Your house is considered private property, and technically you can do whatever you want. For example, you can put cameras to watch out for your pets who like to hang out in the bathroom.

Keep in mind, you can install cameras in any private place such as bathrooms as long as your house is yours and you don’t have any tenants or certain rooms rented out. You can put cameras in the bathroom that you use just by yourself.

When visitors such as your friends, landlords, babysitter, or cleaners are in the house, you must inform them about the cameras in the bathroom, or you temporarily disable them. Otherwise, any recordings in areas where people are expecting privacy are considered illegal and a clear invasion of privacy. 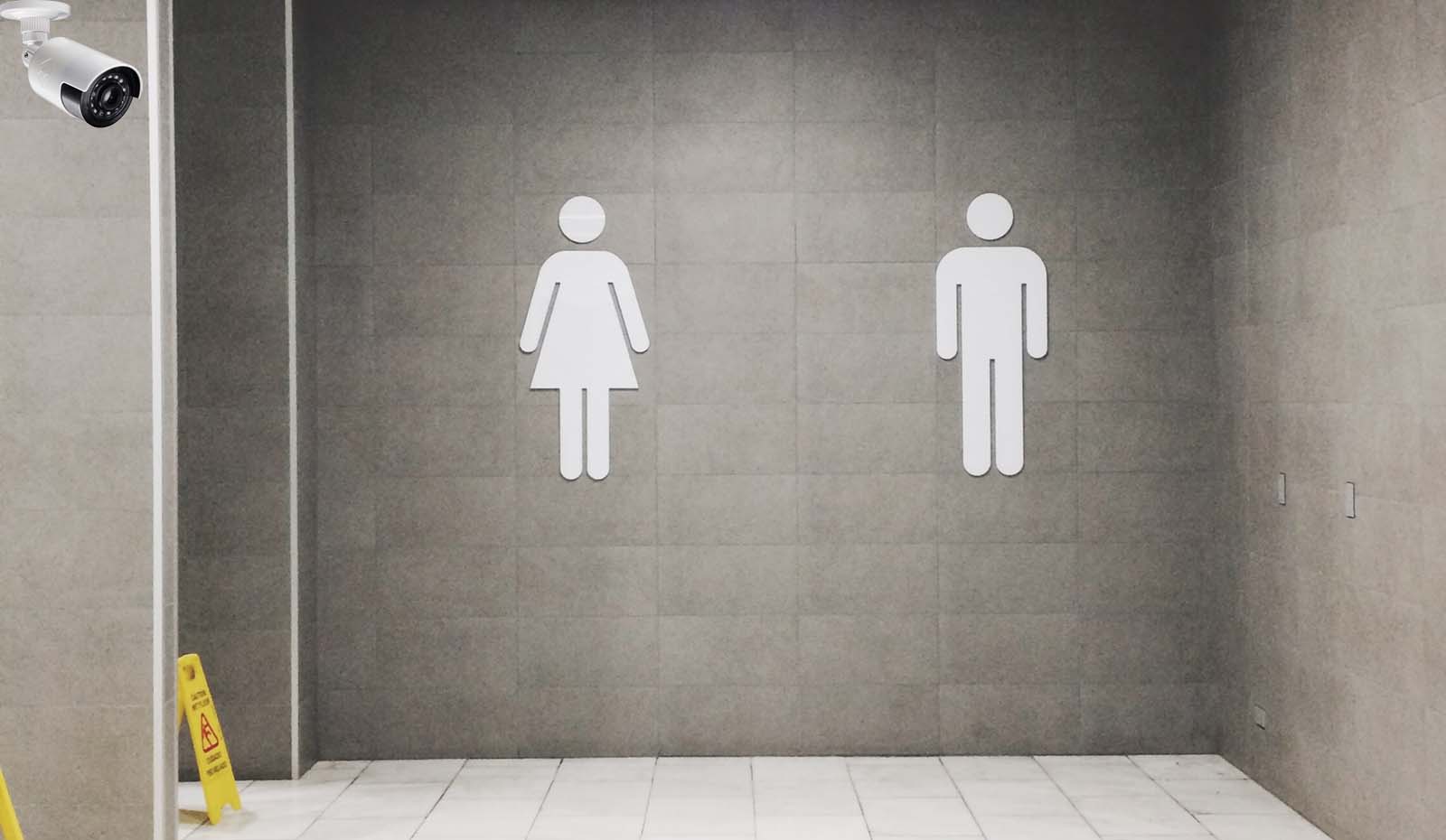 Many states require employers to inform employees with public notices and get their consent first before installing any security cameras in bathrooms or other intimate locations. The notices have to be given in a written form and signed as well.

Only once the employees approve, the business owner can start to install the cameras. If you’re installing video cameras with audio recording, you should know that in many states recording conversations without the consent of all parties is unlawful.

If there are no proper notices given in advance, installing a camera is considered an invasion of privacy and it’s illegal. The employees may sue the employer, bring the case to court and possibly win a settlement. Additionally, the business owner may face severe fines.

How to find hidden cameras in the bathroom?

If you are conscious about your privacy and have concerns that there may be hidden cameras, then inspect the surroundings before using the bathroom or any other private space.

Finding hidden cameras in bathrooms can be tricky and sometimes depends on how well the camera is hidden. To detect hidden security cameras in the bathroom, check the practical tips listed below.

Inspect for any One-Way Mirrors

Some offenders take advantage of one-way mirrors and they install security cameras behind the mirror. So, it looks like a regular mirror, except there’s a camera behind it that is probably recording or even live streaming. 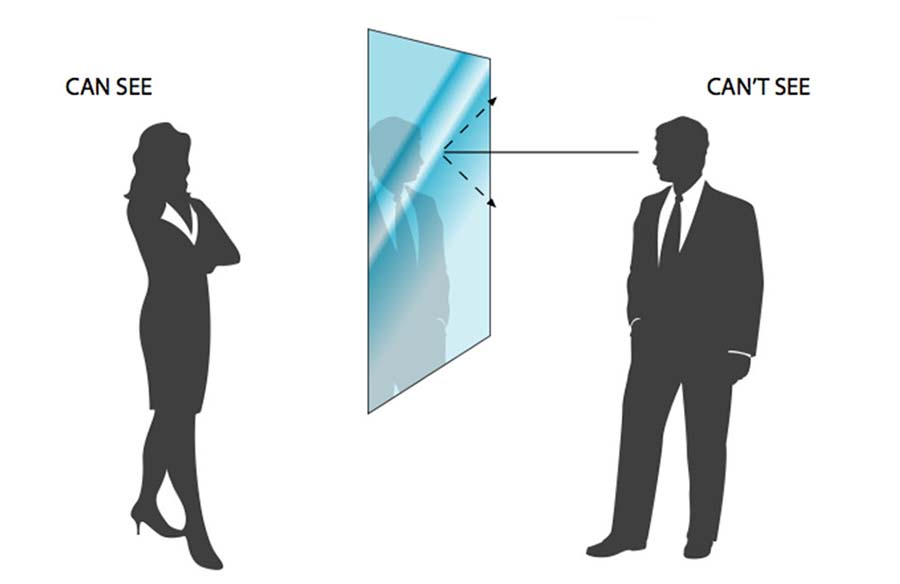 Additionally, you may check the thickness of the mirror piece and how it is installed on the wall. If it’s solid and quite thick, it may be a one-way mirror.

Inspect any Suspicious Items Inside the Bathrooms

If the hidden camera is installed by a random person and not the business owner, it means that this pervert doesn’t have full access to space and most likely will do the installation in a hurry and most likely in conspicuous places. Carefully examine the spots listed below for anything out of ordinary.

Sometimes the hidden cameras are sold as everyday products such as bottles, USB chargers, light bulbs, etc. Google them and check if you see something similar placed in the bathroom.

Detect Cameras by Using your Phone

You can use your smartphone to find hidden cameras installed in public bathrooms. For example, try the method shown below.

Make a phone call while being inside the bathroom and slowly walk around. Disregard the noise of your footsteps and try to hear any interference noises. Depending on the camera types, the signal may interfere with the phone call.

Another way to download hidden camera detector apps on your smartphone. Check if there’s any disguised security camera in public bathrooms.

You may turn off the lights in the bathroom and use the torchlight from the phone trying to find any suspension lights. Some cameras are night vision and emit red light when the lights on the bathroom are turned off.

What to Do If You Find Security Cameras in the Bathroom?

Let’s say that you managed to find hidden security cameras in bathrooms, showers, changing rooms, gym lockers, or other private spaces. Do not touch the recording devices with your bare hands to avoid any possible evidence contamination.

Follow the tips below if you have just found a security camera in the bathroom.

Collect solid and supporting evidence by taking pictures and recording videos that show clearly where the hidden camera was found. Get a close-up picture of the location of the camera and then zoom out to a clear scene.

Photos and videos are strong evidence and will definitely help the police investigating the case. If the case goes to the court of law such evidence will make it easier to prove the offense.

Finding hidden security cameras in bathrooms is a pretty serious offense. However, you need to research the local laws. Each state or country has a different set of laws that you may not be familiar with.

That’s why, before taking any legal action it’s recommended to consult a local lawyer or do some research yourself. The lawyer will help you clarify if you have a case and what are the next steps.

Either way, make sure to gather solid evidence as shown below. If you sue and the case goes in front of a judge, you’ll have plenty of evidence to support your accusations. Additionally, make sure to hire an experienced lawyer.

Remove the Camera from Teenagers’ Bathrooms

This one is for teenagers whose parents install security cameras on their bathrooms, especially for those teenagers who are already eighteen.

Tell your parents your true feelings and thoughts, explain to them that the cameras are illegal in the bathroom, let them be in your shoes. Speak with them politely and communicate effectively, don’t escalate things unnecessarily.

If there’s no reasoning with them and you feel that the camera must go, simply remove it, or cut the cable and obstruct it with a piece of cloth when using the bathroom. 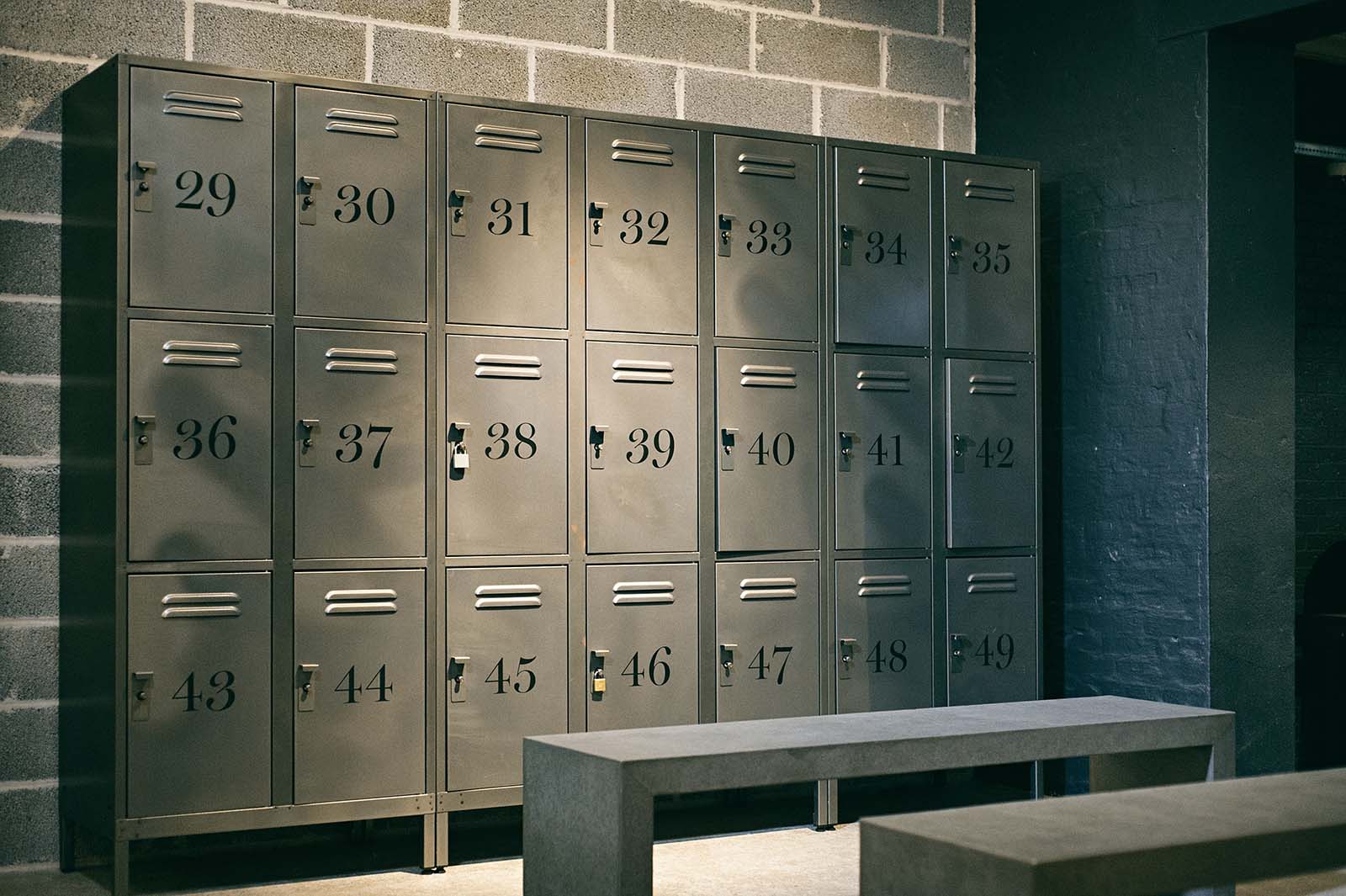 Bring the Attention to the Business Owners

This applies to those who find security cameras in public bathrooms, locker rooms, changing rooms, and other spaces where it’s supposed to be a certain degree of privacy.

Let’s say you found a hidden camera in a restaurant’s bathroom. There are two possibilities: the camera was installed by the business operators secretly, or the business owners have no idea who installed the camera.

If you think that the cameras are placed by the business owner, confront him and threaten them that the police will be notified. See their reaction and play accordingly. If you don’t feel safe, leave immediately and file a report in your local police station.

It may be better for you to unite with other victims and as the business owner for a reasonable settlement. If they don’t accept, contact a local lawyer and they can escalate the case.

When it comes to the case where the camera is installed by an unknown person such as an employee, or a client, then you should ask the business owners to provide security camera footage to trace the culprit. If you feel uncomfortable with the whole ordeal, just notify the police and deal with the case. Make sure to wait there for them and not allow anyone to touch the scene.

Things to Consider about Installing Security Cameras in Bathrooms

That’s the main reason why cameras are rendered illegal in intimate places. You can’t install cameras in a place where according to the law privacy is expected. These intimate places included bathrooms, showers, restrooms, fitting rooms, locker rooms, bedrooms, etc.

Absolutely you should not install cameras in businesses, the bathrooms are considered public and private space. If you need to, make sure to get written permission from your employees and still consult with a lawyer to prevent any future lawsuit.

What about your house? Well, if the house is yours and no one lives with you, it’s your choice if you want to install cameras. If other people live with you, it’s better to respect their privacy.

Laws differ from state to state, however, almost anywhere there are places where privacy is expected. These places can be bathrooms, restrooms, stalls, showers, fitting rooms, etc. Unless you represent a school, then absolutely you cannot install cameras in the above-mentioned spots. Also, before you do anything, consult with a lawyer.

If you find hidden cameras in the bathroom, it’s either installed by the business owner or by an employee or even a patron. Gather evidence, take pictures and photos of the device and then notify the police. Let them handle the case, don’t confront anyone.

We hope this article clarified some stuff about whether security cameras are illegal in bathrooms, how to find hidden cameras, and what you should do if you locate one.