When we look at the specification of an IP camera we can see that many of them offer a slot for SD, SDHC, and SDXC memory card, but what does this mean exactly?

These name rules are related to the maximum storage capacity of the SD cards. The table below shows the details of each type:

If you’re in a rush, take a look at the selection below. All these are reliable and well-tested microSD cards that work perfectly with your CCTV IP cameras. Scroll down to get more suggestions and details.

Things to know before purchasing a microSD card

First, check your camera’s specifications. Some cameras have a limit on what size of memory cards they support. For example, old IP cameras only lets you add microSD cards up to 32GB in size. To support a higher microSD card capacity, you may need to update the firmware on the camera.

Second, determine how much storage space you need based on how you plan to use your surveillance security camera.

If you set up your camera to record continuously, you should use a high-capacity memory card. But if you’ll only use the memory card as a backup storage device, you can settle for one with a lower capacity.

Another factor to consider is the card speed. The speed rating of memory cards is based on their read/write speed. However, on security camera applications, only the write speed matters.

The write speed is the rate at which a memory card writes data (video) to its memory. If you use a slow microSD card, it might cause recorded videos to skip frames or become laggy. 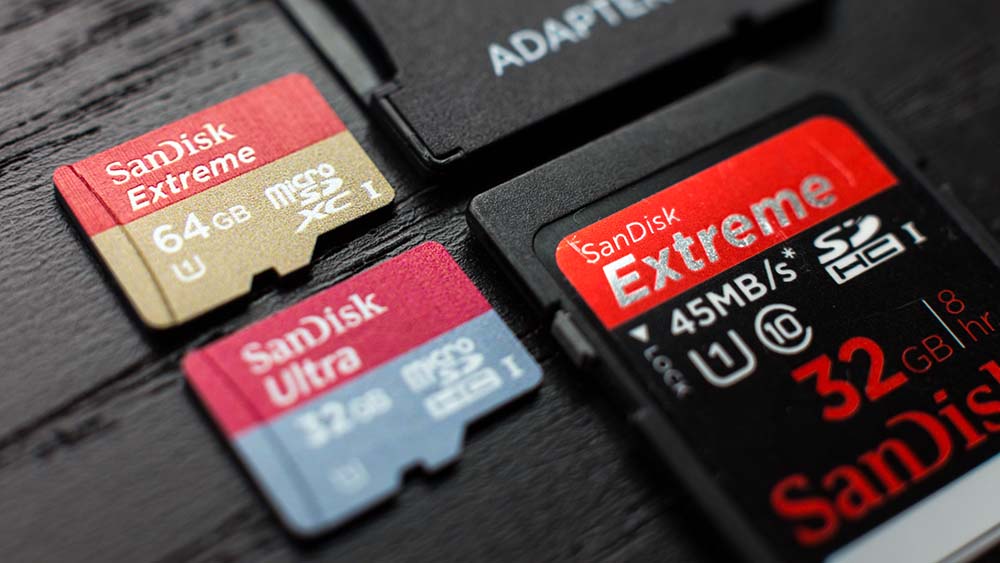 Unfortunately, unlike with the capacity, most security cameras don’t explicitly give a recommended write speed. Most of them tell you to choose a memory card with a speed rating of SDHC Class 10, which means it can sustain a write speed of at least 10MBPS.

Making the choice even more complex, the SDHC speed rating is now being replaced by SDXC I and SDXC II. So, how do you choose a memory card with the right write speed?

We suggest that you base your decision on your camera’s resolution. Cameras with a higher resolution require microSD cards with higher write speeds. For 4K cameras, look for microSD cards that can sustain a write speed of at least 30MB/second.

Samsung PRO Endurance microSD cards were recently released. The best thing about them is that they are designed specifically for home security cameras.

Samsung PRO Endurance cards can maintain a write speed of up to 30MB/second, which is more than enough for 1080p and 720p recordings and just right for 4K recordings. As the name implies, they are also durable.

According to Samsung, they are waterproof (IP67), high-temperature resistant (up to 185℉), magnet-proof, and even X-ray proof. Finally, they are capable of recording for up to 43,800 hours straight (that’s 5 years), making them the perfect solution for video surveillance.

They also include a 5-year warranty. Overall, Samsung PRO Endurance microSD cards provide the perfect balance between performance, durability, and price, making them our top pick. Available in: 32GB, 64GB, 128GB, other.

Sandisk has its own version of a durable microSD card in the form of Sandisk High Endurance. It’s not as fast and durable as Samsung PRO Endurance, but it’s a low-cost option for lower-end cameras.

They sell 32GB, 64GB, 128GB, and 256GB models and are designed for cameras with a resolution of 1080p and higher. However, they are high-temperature-resistant (up to 185℉), shockproof, X-ray-proof, and waterproof. It’s highly recommended for outdoor security cameras.

If speed is your priority, Sandisk Extreme Plus is another good option. Performance-wise, it’s similar to Samsung PRO Endurance with a write speed of up to 520MB/second. However, while it’s fast in terms of write speed, it’s not designed for prolonged recording.

Also, Sandisk Extreme Plus is only durable to an extent. It’s waterproof, temperature resistant, and X-ray proof. Plus, it’s pricier than Samsung Pro Endurance. Available in: 32GB, 64GB, 128GB, 256GB.

Our final pick is the Kingston Endurance microSD card, and we recommend it for very specific use: outdoor security cameras in frigid environments.

Kingston Endurance isn’t as fast as the other options, but it can withstand very low temperatures. Durable in harsh conditions — built and tested to be shockproof, waterproof, temperature proof, and protected from x-rays

The microSD cards for CCTV security cameras must be reliable, fast, and fit your budget. The brand name is not that much important, however, it’s better to go with well-known manufacturers who stand behind their names.

The Best Video Doorbell cameras in 2022

How to Install Chromecast on Samsung TV (Smart and Standard TV)

How To Reconnect August Lock To Bluetooth

How to Delete Camera Recordings From Hikvision NVR or DVR

How to Delete Nest Cam Recordings