You have probably heard about PoE security cameras and how convenient they are. A PoE security camera is able to get powered over the Ethernet cable (hence why it’s called PoE) which means there’s no need to run a cable to power up the camera.

The data and the power are transmitted via the same network cabling. It’s a great feature because you have to run fewer wires, it’s more reliable, the installation will look clean and it makes things easier in larger installations. Additionally, you don’t need to deal with power supply boxes.

The PoE cameras can be powered using a PoE switch that can be daisy-chained (linked) to act as CCTV camera hubs or help to extend cable runs. In this guide, we will show how to power up a PoE security camera using a PoE switch. A full guide explaining the PoE features in CCTV systems. 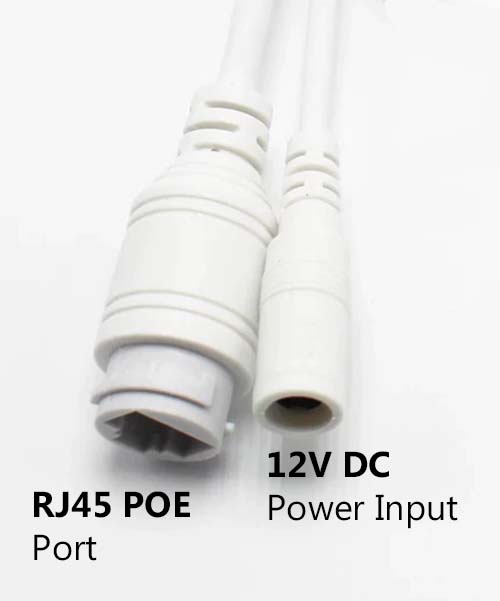 How to power a PoE security camera via a PoE switch

Below is a complete guide to understanding the PoE switches and the PoE cameras.

What is PoE in security cameras?

Power over Ethernet, abbreviated as PoE, is a technology that simplifies wiring by simultaneously sending data and power over the network cable. It’s a revolutionary solution that helps in camera installations. The main reason why the PoE feature is useful in 4K security camera systems is because network cable (Ethernet) is easier to run and cheaper when compared to the coaxial cable.

Obviously, since everything necessary is transmitted via the same cable, there is no need to run a separate power cable for each camera. Just run one cable and the camera will be able to send and receive the data and power through it.

Additionally, using PoE doesn’t affect the resolution of the camera system, it can be 4K or any other resolution. In fact, the highest camera resolutions are IP systems and, some of them, support PoE only and offer no option to power it via a separate power cable.

What is a PoE switch?

PoE switches are power devices with multi ports that are used to power up any number of PoE security cameras. Actually, the number of cameras that can be powered is related to the number of ports on the PoE switch.

For example, if it’s a 4 port PoE switch, it means it has 4 powered Ethernet ports and the rest are up-link ports that don’t inject any power. Simply inspect the marks on the switch, if the port is PoE it will be marked as “PoE” or sometimes with a thunder icon.

The PoE switches are usually available on 4, 8, 16, 32, 64 ports, and using the gigalink ports you can daisy chain additional switches creating larger networks, or connect them to an NVR or a router. The options are endless, whatever the camera job requirements are, you’ll find a way to link them together in a convenient way.

When researching PoE switches for your security camera system you may have landed on this dilemma: should you use managed or unmanaged PoE switches? A managed switch allows for more complex network configurations and adjustments and definitely requires a professional IT person to handle it.

On the other hand, unmanaged switches are basically Plug and Play which means there’s no need for additional configuration. These types of switches are easier to install and are ideal for any kind of home and small business installation.

If your project is relatively small (4-32 cameras) then you should go with unmanaged switch(s), make sure to purchase one that has good feedback from the customers. This how-to guide will refer to the unmanaged switches only.

Importing: Check the specs of your PoE switch before connecting anything

Be cautious to check out the specs of the PoE switch that you intend to use. There are various types of PoE switches that provide varying types of power and are designed for specific uses. Moreover, some specs may differ from a manufacturer to another one.

Make sure that you understand the power requirements of all your cameras and ensure that the chosen PoE switch can handle them. If not, it may cause serious damage to your devices.

The crucial spec that you need to look for is the so-called “passive PoE”. A passive PoE port will send out power via the Ethernet cabled regardless of the other device power requirements. In other words, if the protocol is not followed carefully, the PoE switch may send out more power than needed and fry the camera.

Look out for compatible PoE switches that should be clearly labeled as 802.3af or 802.3at. It’s recommended to go with established switch manufacturers, switches that have good reviews and tested out properly. For example, Ubiquiti makes top-notch PoE switches.

PoE switches feature the PoE ports which are powered and marked as “PoE” and the unpowered ports known as uplink ports (sometimes called “gigalink” ports). Inspect the back of the PoE switch to understand the layout better, an example is shown below.

Steps on how to use a PoE switch with PoE security camera systems: 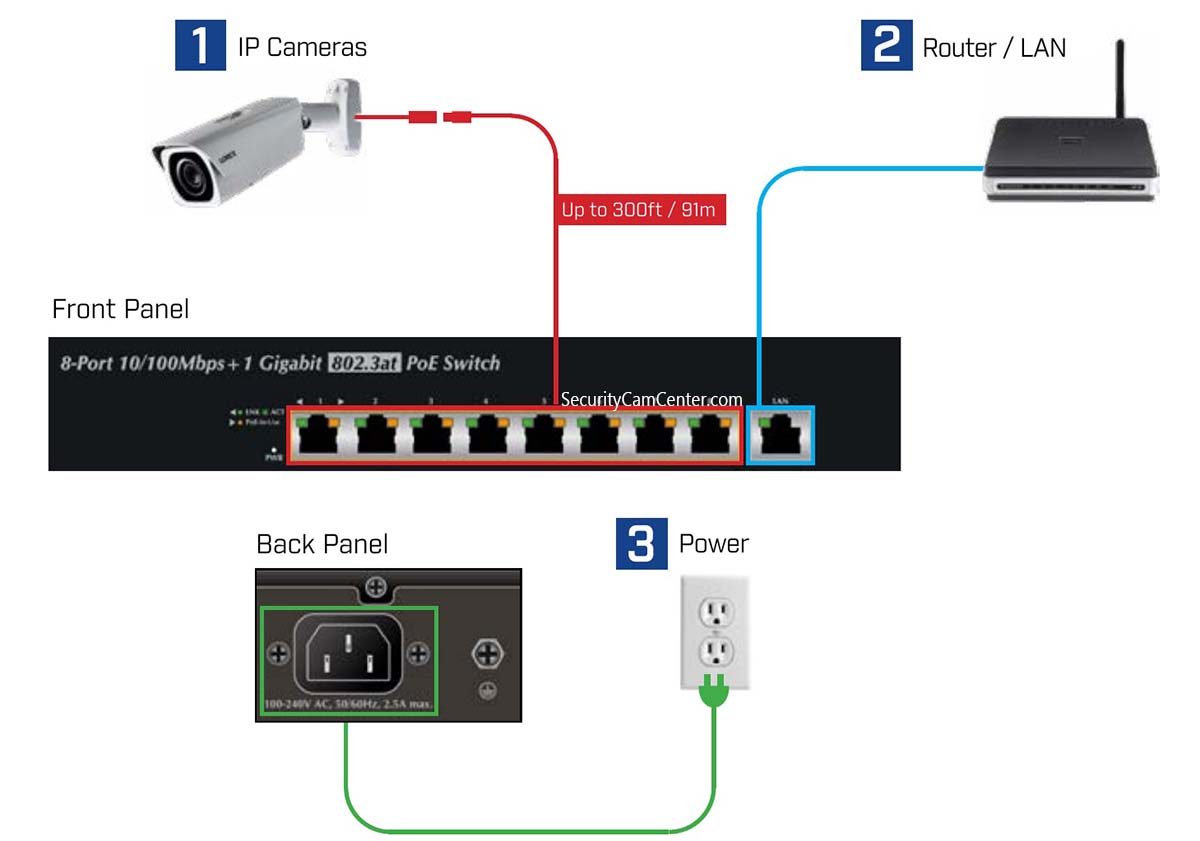 For illustrations, check the picture above. Pretty much that’s all. If the camera doesn’t power up, make sure the cables are terminated correctly, the RJ45 connector on the camera is good, ensure the connections are properly secured. Additionally, inspect the PoE switch to make sure it’s functioning correctly. Always go for reliable PoE switches.

Ways you can use a PoE switch with a PoE camera

PoE switches can be used with any devices that support the PoE feature. The most common situations where you can use a PoE security camera with a PoE switch: